B.O.B., short for Benzoate Ostylezene Bicarbonate, is a blue one-eyed indestructible gelatinous mass that was spontaneously created in a laboratory when scientists injected a chemically-altered ranch dressing into a genetically-altered tomato. He has the ability to absorb anything, can form into any shape, doesn't have a brain and digests objects within seconds (depending on size). He can also extend his body and detach his eyeball. He was captured in 1958 and was sent to Area Fifty-Something.

It is unknown how far B.O.B. can actually elongate his whole structure, but is seen to be very long in the movie after helping himself and the other monsters get to the core of the spaceship when the Clones were charging at them. He is the joker of the team always laughing and being dimwitted at times. In the movie he was the only one to think of a 'successful plan' than the other monsters to get to Ginormica without being seen. It is almost proved that he's resistant to physical attacks because he defended Dr. Cockroach from the Alien that was attacking him but managed to stay stable after being punched in the eye and the eye bounced back then forward hitting the Alien. It could be possible that he is resistant to energy and mental attacks because of his unique physique and lack of a brain but that is not proven.

Since he doesn't have a brain, he sometimes mistakes his team as the foe during the battle with the aliens, and he also might go the wrong way or get distracted by something. This can be proven since he doesn't know simple problems in Educational Television.

Due to his state of matter, anything can go though him. If the object is small, he may not notice it.

In The Sneezing Horror, when B.O.B. is sick, he hallucinates and develops different personalities in which he can't control.

According to Meet the Monsters, his condition also makes it impossible for him to swim.

B.O.B. is the end result of a experiment combining a genetically engineered tomato with chemically altered ranch salad dressing. He subsequently went on a rampage devouring six city blocks before he was captured by General Monger in 1958 and imprisoned inside Area Fifty-Something. Once at the base Monger force fed him a excessive amount of Carrot puree that deeply traumatized him.

He met The Missing Link 3 years later in 1961, Dr. Cockroach another year later in 1962, The Invisible Man sometime before 1968 and Insectosaurus one year later in 1969. Prior to the episode Attack of the Movie Night, B.O.B. was frightened by big moustaches, and to cure him, Link had to put on a fake walrus moustache and B.O.B. attacked him.

In 1968 Doctor Cockroach and Missing Link threw B.O.B. a birthday party, which in reality was a false premise they used to feed B.O.B. a chemical compound they believed would turn him into a living bomb in a effort to escape the base. Instead of having the desired effect however the bomb compound gave B.O.B. the ability to read minds. Deciding to make the most of it Link and Doctor Cockroach attempted to use B.O.B. to read Monger's mind a find a way to escape the base.

The group succeeded in finding Monger's personal jet, unfortunately B.O.B. was led to believe the jet was a pinata and thus destroyed the jet leading to the trio's recapture by Monger. Worst yet the group soon learned that B.O.B.'s mind reading powers had been destroyed in the crash which led to another birthday party for B.O.B., of which only Monger, B.O.B. and the Invisible man enjoyed.

Unfortunately 16 years after the party in 1964 the Invisible Man died of a Heart attack, the others didn't let B.O.B. know so that they could avoid hurting his feelings instead telling him that the invisible Man escaped.

No sooner is Susan placed in the monster prison and meets her cellmates, she's frightened beyond her wits' end. Immediately, B.O.B. wishes to know her name, and she replies 'Susan'. Just 3 weeks after Susan arrived, Gallaxhar had arrived with an arsenal that overwhelmed the US army's own. After Dr. cockroach had failed to shrink Susan down to size once again, General Monger had arrived and offered them a deal: take down the wandering robot probe and they gain their freedom. After winning the San Francisco battle and earning their long-awaited freedom, the monsters make their 1st visit to Modesto, albeit with disastrous results. After Susan gets abducted and Insectosaurus is killed by Gallaxhar, it is Link. that comes up with the plan to board the spaceship via jetpacks. After activating the self-destruct sequence, B.O.B., Link and Dr. Cockroach are trapped in one of the ship's chambers. Failing to understand what was happening, he tells them he would see them tomorrow. The others promise him a wonderful meal. At the last moment Susan becomes Ginormica once more and she busts them, making their way to General Monger and the resurrected Butterflysaurus. After being hailed by Modesto and the world as heroes, B.O.B. 'breaks up' with Derek, choosing him over Diane before he joins the rest of team monster in the battle with Esgargantua in Paris.

In Mutant Pumpkins from Outer Space

Tried to go out as Elvis, until Monger mentions a space ship over Modesto. He then tries to negotiate with the pumpkins, as he knew the "Produce" language. After this, and an insult about his mother in a salad bar, he and the others worked with the neighborhood children to fend off the pumpkins.

In Night of the Living Carrots

When Link vanquished the last mutant pumpkin, some of it's genetic material came in contact with a carrot. It soon spread to a whole army that upon biting anyone with a brain became a zombie. Upon being told that only he could stop them, B.O.B. screamed in horror: After he was sent to area fifty-something, Monger fed him an endless amount of mushy carrots. B.O.B. considered replacing his zombified friends with plush toys, but he knew he couldn't, so he ate all of the Modesto carrot plague, freeing all those who were under the zombie influence (albeit temporarily becoming a carrot himself).

B.O.B. is a parody of the antagonist from the 1958 film, the Blob. In said film, an alien substance goes on a rampage, absorbing anything in it's path. His origin and one eye are more akin to the film 'Attack of the Killer tomatoes'.

Dr. Cockroach As the 2nd monster captured by Area 5?, Dr. Cockroach became one of B.O.B.'s earliest friends. Dr. Cockroach is the one who explains to B.O.B. certain knowledge, like Susan's Gender.

The Missing Link Link came to Area 5? In the 60s as the 3rd monster to be captured. After Insectosaurus was excluded from the series, Link and B.O.B. became best friends.

Ginormica  When B.O.B. and Susan first met, he was probably the least frightening monster in her view. 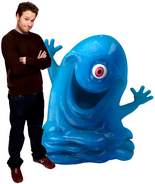 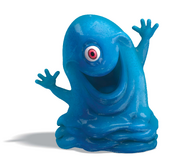 all you need to take charge is a sombrero.

Having a wonderful time 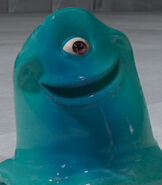 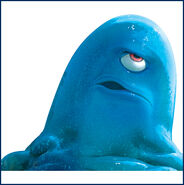 Those pants don't match his eye. 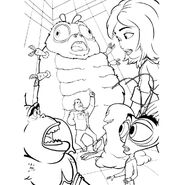 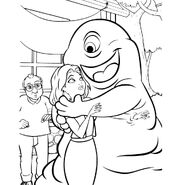 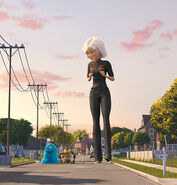 The only way to cross.

B.O.B can't trust his own tush.