Monsters vs. Aliens Wiki
Register
Don't have an account?
Sign In
Advertisement
in: Characters, Aliens, Female,
and 3 more

Sta'abi is a character in Monsters vs. Aliens. [1]

A true hot-head, Sta'abi is quick to take matters into her own hands. She's aggressive first and asks questions later, which makes her a little hard to get along with. She also fails to understand certain Earth customs...like emotions.

As in My Monster, My Master, if she loses a challenge multiple times, she would want to be trained by her defeater no matter how stupid they are which might be learned.

Sta'abi is shown to have superhuman strength as she is able to throw Link around, as well as using him like a hammer to pound Dr. Cockroach into the ground like he was a nail. This is also proven in Destroy Chickie D! when she tunneled to the armory to get her spear, her locker for a change of clothes, the mess hall to ruin the stock of pudding, and out of the base instantly with only a spoon.

She is also capable of super athleticism and flexibility. She also possesses a multi purpose spear.

There is no doubt she is underestimated by certain foes such as Link. She is also not very durable and could be easily damaged. 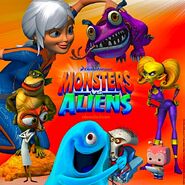 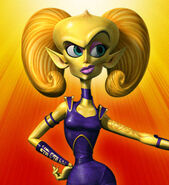 The warrior meets the nitwit

The reason she can't leave Earth.

What did you say?

Time for the hunt

"I shall never decline a challenge" 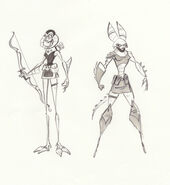 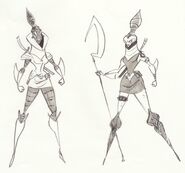 I have defeated the Kitten!

Sta'abi Ready of The Duel